Some of you may know what Ulam’s spiral is (I am not describing what it is because the present Wikipedia entry is awesome, though I mentioned it earlier also). When I first read about it, I thought that it is just a coincidence and is a useless observation. But a few days ago while reading an article by Yuri Matiyasevich, I came to know about the importance of this observation. (Though just now I realised that Wikipedia article describes is clearly, so in this post I just want to re-write that idea.)

It’s an open problem in number theory to find a non-linear, non-constant polynomial which can take prime values infinitely many times. There are some conjectures about the conditions to be satisfied by such polynomials but very little progress has been made in this direction. This is a place where Ulam’s spiral raises some hope. In Ulam spiral, the prime numbers tend to create longish chain formations along the diagonals. And the numbers on some diagonals represent the values of some quadratic polynomial with integer coefficients. 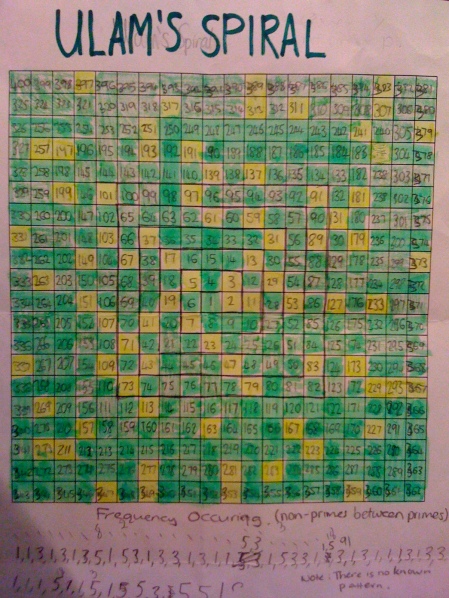 Ulam spiral consists of the numbers between 1 and 400, in a square spiral. All the prime numbers are highlighted. ( Ulam Spiral by SplatBang)

Surprisingly, this pattern continues for large numbers. A point to be noted is that this pattern is a feature of spirals not necessarily begin with 1. For examples, the values of the polynomial

form a diagonal pattern on a spiral beginning with 41.