Following are the four examples of sequences (along with their properties) which can be helpful to gain a better understanding of theorems about sequences (real analysis):

I was really amazed to found that

is a strictly increasing sequence, and in general, the function

defined for all positive real numbers is an increasing function bounded by 1: 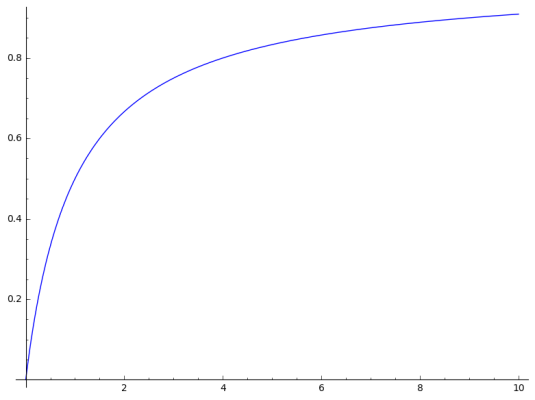 Also, just a passing remark, since

, and as seen in prime number theorem we get an unbounded increasing function 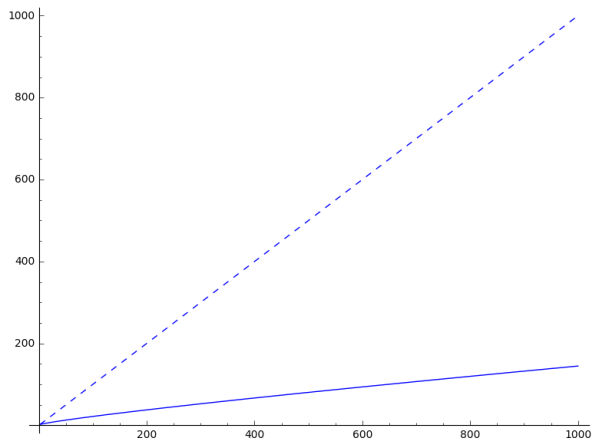 The plot of x/log(x) for x>2. The dashed line is y=x for the comparison of growth rate. Plotted using SageMath 7.5.1

Few days ago I found something very interesting on 9gag: 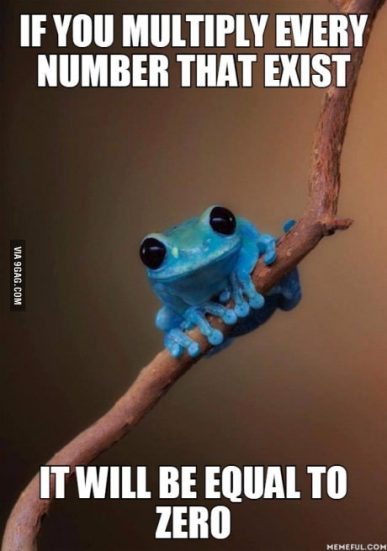 When I first read this post, I was amazed because I never thought about this obvious fact!!

There are lots of interesting comments, but here is a proof from the comments:

Though the statement made in the post is very vague and can lead to different opinions, like what about doing the product with surreal numbers, but we can safely avoid this by considering the product of real numbers only.

Now an immediate question should be (since every positive real number has a negative counterpart):

Is the sum of all real numbers zero?

In my opinion the answer should be “no”. As of now I don’t have a concrete proof but the intuition is:

Moreover, since the sum of all “positive” real numbers is not a finite value (i.e. the series of positive real numbers is divergent) we conclude that we can’t rearrange the terms in series of “all” real numbers (Riemann Rearrangement Theorem). Thus the sum of real numbers can only be conditionally convergent. So, my above argument should work. Please let me know if you find a flaw in these reasonings.

The real numbers are uncountably infinite, and the standard notions of summation are only defined for countably many terms.

Note: Since we are dealing with infinite product and sum, we can’t argue using algebra of real numbers (like commutativity etc.).

In Madhava Mathematics Competition 2015 (held in January 2015), we were asked to prove the convergence of Kempner Series (first time proved in 1914). Recently I discovered the paper by A. J. Kempner (http://www.jstor.org/stable/2972074), so in this blog post I will state and prove that problem.

The basic idea behind proof is to divide whole series into chunks (finding symmetry) and then construct a converging geometric series which will act as upper bound of Kempner Seires. 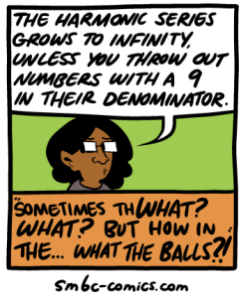 A detailed study of this cartoon has been done by Ben Orlin (http://bit.ly/1KD4shF)

, converge, if the denominators do not include all natural numbers

, but only those numbers which do not contain any figure 9.

Proof: Given Series is:

Now we can rewrite above series as:

.
Observe that, each term of

which forms part of

, is less than or equal to

which are contained in

there are, as is easily seen, less than

. Altogether there are in

Assume now that we know the number of terms in

which are contained in

to be less than

. Then, because each term of

which is contained in

is not greater than

Now, let’s go for induction. For

we have verified all this, and we will now show that if it is true for

can be broken up into the nine intervals,

. The last interval does not contribute any term to

, the eight remaining intervals contribute each the same number of terms to

, and this is the same as the number of terms contributed by the whole interval

, that is, by assumption, less than

, and each of these terms is less than or equal to

——————————–
Note: There is nothing special about 9 here, the above method of proof holds unchanged if, instead of 9, any other figure

is excluded, but not for the figure