Today is the 130th birthday of Srinivasa Ramanujam Iyengar.

I will discuss the easiest-to-follow work of Ramanujam, from G. H. Hardy’s Ramanujan: Twelve lectures on subjects suggested by his life and work.

is a division of

The order in which the partitions are arranged is irrelevant, so we may think of them, as arranged in descending order. We denote the number of partitons of

. Also, by convention, we define

Very little was known about the arithmetical properties of

; when Ramanujam started his investigations. Though we still don’t know when

is even or odd, there has been a lot of progress in this domain of research. For an overview, see the first section of Ken Ono’s “Distribution of the partition function modulo m” (it’s 17-year-old paper…)

Ramanujam was the first, and up to his death, the only, mathematician to discover the arithmetical properties of

. His theorems were discovered by observing Percy MacMahon‘s table of

for the first 200 values of

. In particular, the numbers of the partitions of numbers

Hence, for example, for

. And we can verify this using SageMath:

Now, to check its divisibility by 7, take the last digit of the number you’re testing and double it. Then, subtract this number from the rest of the remaining digits. If this new number is either 0 or if it’s a number that’s divisible by 7, then the original number is divisible by seven. [Derive it yourself!]

This process is lengthy but it converts the process of division by a simpler operation of subtraction.

If you know how SageMath calculates the number of partitions, please let me know in the comments below.

Nim is a very old game with precise mathematical theory, and one player can always force a win.

We define a winning position as a position such that if one player P (A or B) can secure it by his/her move, leaving his/her opponent Q (B or A) to move next, then, whatever Q may do, P can play so as to win the game. Any other position we call a losing position.

Next, we express the number of matches in each heap in the binary scale and form a figure by writing down one under the other. Then we add up the columns. For example, consider the following position:

If the sum of each column is even (which is the case above), then the position is correct. An incorrect position is one which is not correct, thus (1,3,4) is incorrect.

Then we have the following result:

A position in Nim is a winning position if and only if it is correct.

For the proof/discussion/variations of rules, see § 9.8, of G. H. Hardy and E. M. Wright’s An Introduction to the Theory of Numbers.

But designing an elaborate winning strategy, i.e. ensuring that you always stay in winning position, is not so easy (though we know it exists!). For example, watch this video by Matt Parker:

Earlier this year I discussed a finite analogue of the harmonic sum. Today I wish to discuss a simple fact about finite harmonic sums.

is a prime integer, the numerator of the fraction

We wish to treat the given finite sum modulo

, hence we can’t just add up fractions. We will have to consider each fraction as inverse of an integer modulo p. Observe that for

, we have inverse of each element

in the multiplicative group

The desired result follows by summation.

We can, in fact, prove that the above harmonic sum is divisible by

, see section 7.8 of G. H. Hardy and E. M. Wright’s An Introduction to the Theory of Numbers for the proof.

is the ascending sequence of irreducible fractions between 0 and 1, whose denominators do not exceed

. This sequence was discovered by Charles Haros in 1806, but Augustin-Louis Cauchy named it after geologist John Farey.

, the numbers 0 and 1 are included in the forms

Following are the  characteristic properties of Farey sequence (for proofs refer §3.3, §3.4 and §3.7 of G. H. Hardy and E. M. Wright’s An Introduction to the Theory of Numbers):

The Stern-Brocot tree, which we saw earlier while understanding the working of clocks, is a data structure showing how the sequence is built up from 0 (=0/1) and 1 (=1/1) by taking successive mediants.

of unit circumference, and an arbitrary point

of the circumference as the representative of 0 (zero), and represent a real number

, measured round the circumference in the anti-clockwise direction, is 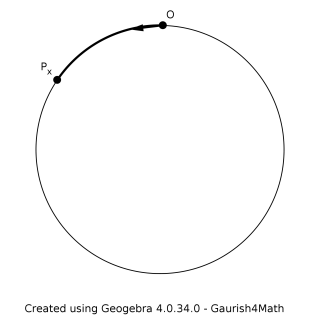 Plainly all integers are represented by the same point

, and numbers which differ by an integer have the same representative point.

Now we will divide the circumference of the circle

in the following manner:

The aggregate of Farey arcs is called Farey dissection of the circle. For example, the sequence of mediants for

is a Farey point, and

, then the Farey arc around

is composed of two parts, whose lengths are

are unequal (using the point (4.) stated above)and neither exceeds

Theorem: In the Farey dissection of order

, each part of the arc which contains the representative

has a length between 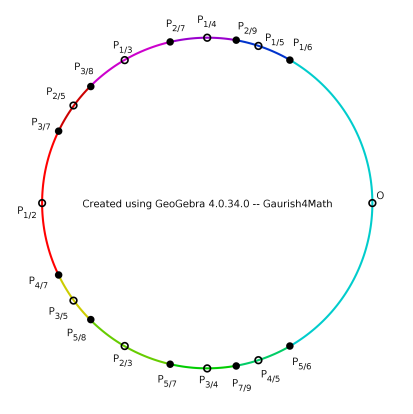 Using the above result, one can prove the following result about rational approximations (for more discussion, see §6.2 of  Niven-Zuckerman-Montgomery’s An Introduction to the Theory of Numbers):

is a real number, and

a positive integer, then there is an irriducible fraction

One can construct a geometric proof of Kronceker’s theorem in one dimension using this concept of Farey dissection. See §23.2 of G. H. Hardy and E. M. Wright’s An Introduction to the Theory of Numbers  for details.

Last month I appeared for my Biology mid-sem exam. I discovered Hardy-Weinberg Equation, which states that:

You can understand this equation here:

Now the interesting point for me here was that Hardy preferred his work to be considered pure mathematics, perhaps because of his detestation of war and the military uses to which mathematics had been applied. He made several statements similar to that in his autobiography (A Mathematician’s Apology):

“I have never done anything ‘useful’. No discovery of mine has made, or is likely to make, directly or indirectly, for good or ill, the least difference to the amenity of the world.”