Nim is a very old game with precise mathematical theory, and one player can always force a win.

We define a winning position as a position such that if one player P (A or B) can secure it by his/her move, leaving his/her opponent Q (B or A) to move next, then, whatever Q may do, P can play so as to win the game. Any other position we call a losing position.

Next, we express the number of matches in each heap in the binary scale and form a figure by writing down one under the other. Then we add up the columns. For example, consider the following position:

If the sum of each column is even (which is the case above), then the position is correct. An incorrect position is one which is not correct, thus (1,3,4) is incorrect.

Then we have the following result:

A position in Nim is a winning position if and only if it is correct.

For the proof/discussion/variations of rules, see § 9.8, of G. H. Hardy and E. M. Wright’s An Introduction to the Theory of Numbers.

But designing an elaborate winning strategy, i.e. ensuring that you always stay in winning position, is not so easy (though we know it exists!). For example, watch this video by Matt Parker:

Easy to state and hard to solve problems make mathematics interesting. Packing problems are one such type. In fact there is a very nice Wikipedia article on this topic:

Packing problems involve attempting to pack objects together into containers. The goal is to either pack a single container as densely as possible or pack all objects using as few containers as possible.

I came across this problem a couple of years ago, while watching the following TED Talk by Eduardo Sáenz de Cabezón:

In this talk, the object of attraction is the Weaire-Phelan structure made from six 14-hedrons and two dodechedrons. This object is believed to be the solution of Kelvin’s problem:

How you can chop 3d space into cells of equal volume with the minimum surface area per cell?

The packing problem for higher dimensions was in news last year, since a problem about “Densest Packing Problem in Dimensions 8 and 24” was solved by a young mathematician (Maryna Viazovska). The mathematics involved in the solution is very advanced but we can start gaining knowledge from this book:

A classic reference in this field by two well known geniuses.

Screen-shot of Dr. Eckard Specht’s homepage, his online problem collection (with solutions; each problem in GIF, PS and PDF formats) and Packomania.

Computers also have a role to play in solving such optimization problems For example, in 2015 Thomas Hales formally proved Kepler’s Conjecture about 3D packing:

The proof was a huge collaboration and was called Flyspeck Project. The details about this proof are available in this book:

NOTE: You can construct your own Truncated octahedron and Weaire-Phelan polyhedra by printing the nets available at Matt Parker’s website.

While reading standup mathematician Matt Parker‘s book Things to Make and do in Fourth Dimension, I found answer (on pp. 146) to the question I raised 7 months ago. 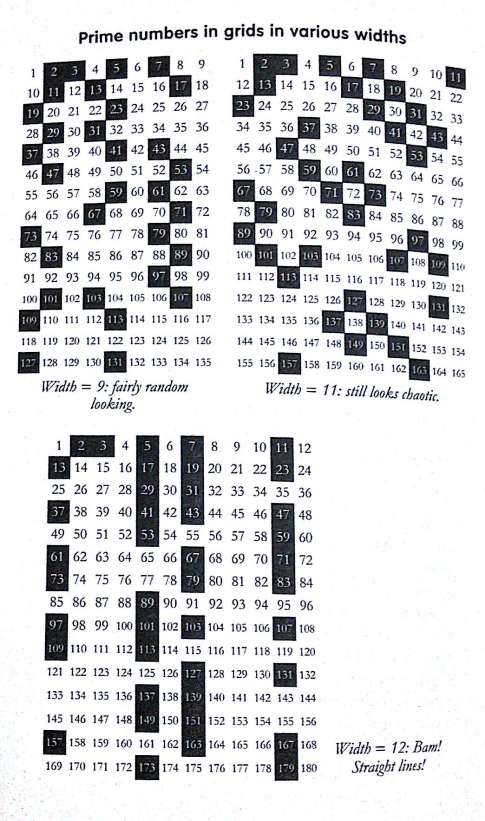 When the grid happens to be a multiple of 6 wide, suddenly all primes snap into dead-straight lines. All primes (except 2 and 3) are one more or less than a multiple of 6. (© Matt Parker, 2014)

The square of every prime number greater than 3 is one more than a multiple of 24.

be an odd prime not equal to 3. Now we subtract one from the square of this prime number. Therefore, we wish to prove that

Observe that exactly one of three consecutive numbers,

must be divisible by 3. Since

is an odd prime different from 3, one of

must be divisible by 3. Hence we conclude that

Combining both the conclusions made above, we complete proof of our statement (since 2 and 3 are coprime).

Edit[19 April 2017]: Today I discovered that this theorem is exercise 68 in “The USSR Olympiad Problem Book“.