These are the two lesser known number systems, with confusing names.

Hyperreal numbers originated from what we now call “non-standard analysis”. The system of hyperreal numbers is a way of treating infinite and infinitesimal quantities. The term “hyper-real” was introduced by Edwin Hewitt in 1948. In non-standard analysis the concept of continuity and differentiation is defined using infinitesimals, instead of the epsilon-delta methods. In 1960, Abraham Robinson showed that infinitesimals are precise, clear, and meaningful.

Following is a relevant Numberphile video:

Surreal numbers, on the other hand, is a fully developed number system which is more powerful than our real number system. They share many properties with the real numbers, including the usual arithmetic operations (addition, subtraction, multiplication, and division); as such, they also form an ordered field. The modern definition and construction of surreal numbers was given by John Horton Conway in  1970. The inspiration for these numbers came from the combinatorial game theory. Conway’s construction was introduced in Donald Knuth‘s 1974 book Surreal Numbers: How Two Ex-Students Turned on to Pure Mathematics and Found Total Happiness. 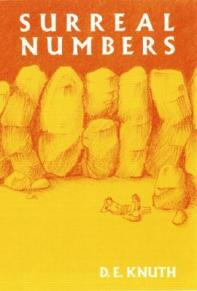 In his book, which takes the form of a dialogue, Knuth coined the term surreal numbers for what Conway had called simply numbers. This is the best source to learn about their construction. But the construction, though logical, is non-trivial. Conway later adopted Knuth’s term, and used surreals for analyzing games in his 1976 book On Numbers and Games.

Following is a relevant Numberphile video:

Many nice videos on similar topics can be found on PBS Infinite Series YouTube channel.

I have written many philosophical blog posts motivated by the idea of existence of reason for everything.  So far I have written (and revised) my point of view regarding topics like Being Alive, Loving Mathematics,  Becoming Mathematician and Dreaming Big.

A more fundamental and more disturbing question is:

Since each and everything is made up of atoms, what is the borderline between a living organism and non-living object.

Clearly, mathematics will fail to answer this question since there are no absolute quantifiers involved. But still we can try deducing an answer from logical arguments. Following video by Kurzgesagt – In a Nutshell illustrates my question:

Once you call yourself a living organism, the immediate question is about the purpose of your existence (since we believe that there is reason for everything). So we can use this as a quantifier to classify something as living and non-living. Many people have tried (and failed) to answer this question. I came across a possible answer for this question in the film Kubo and the two strings:

We live to write a story and then become immortal in memories of others in form of our stories.

I really liked this point of view. Being alive is all about being able to create memories. But this view point is very much human centred since we don’t know how other organisms (like other animals, plants, cells, organelles…) interact. Moreover, non-living objects also have stories associated with them (like monuments, paintings,…). So this view point also fails to capture the central idea for classification of something as living or non-living.

I will be happy to know your viewpoint of being able to classify something as living or non-living.

You can read more about it here. Also for the sake of completeness, let me state Hilbert’s Tenth Problem:

Does there exist an algorithm to determine whether a given Diophantine equation has a solution in rational integers?

In 1970, Yuri Matiyasevich completed the solution of this problem by using the concept of Turing Machine. This short video provides a nice overview about Turing Machines in general

The answer to Hilbert’s Tenth Problem problem is

No such algorithm exists.

This interplay of number theory and logic is really interesting, isn’t it? But I can’t discuss solution of Hilbert’s Tenth Problem here, since I have never read it. But there is nice overview at Wikipedia.

I will rather discuss a puzzle from Boris A. Kordemsky’s book which illustrates the idea of this interplay.

Ask a friend to pick a number from 1 through 1000. After asking him/her ten questions that can be answered yes or no, you tell him/her the number. What kind of question?

The key to the solution is that 2 to the tenth power is 1024 (that is, over 1000). With each question you knock out half the remaining numbers, and after ten questions only the thought number is left.

I welcome you to think of a number and write the corresponding yes/no questions as a comment below.

I like to predict things going to happen each day based upon some (il)logical reasoning. Also, earlier this year I wrote a blog post: “Inquisitive Mathematical Thinking“.

Today, inspired by various “wrong” interpretation of “Principle of Mathematical Induction” which leads to various absurd results, I came up with an idea of giving a “flawed” proof of (i.e. I will deliberately mimic what I call “rape of Mathematics”):

Every day is good day.

Today is a good day.
This is trivially true (just like the statement “the sun rises in east”).

Now, what remains to prove is that

Since, our past actions determine our future results (metaphysical truth), if today is good day then I will be able to prepare for tomorrow’s challenges and hence my tomorrow will be good. Thus proving the inductive step.

————————–
The above proof has lot of logical flaws like: ” How do you define a day to be good?” and “Implication is based on a metaphysical truth”.

Bottom line: Life not as simple as Mathematics!